Dr. Nichols has no dislcoures.

GRIEVANCE POLICY: The AOMA strives to provide continuing medical education programs to fulfill the needs of the attendees and to meet the AOA Uniform Guidelines and AOA Accreditation Requirements. Comments, questions, or complaints should be forwarded to AOMA Executive Director Josephine Zammuto, by calling the AOMA Office at 602-266-6699 or by mail to AOMA, 1951 W. Camelback Rd., Suite 105, Phoenix, AZ 85015, or by email to info@azosteo.org. 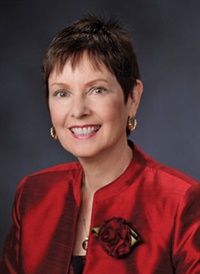 In 2015, she was selected for the highest honor given by the American Osteopathic Association (AOA), the Distinguished Service Award as well as receiving a Presidential Citation in 2018. In 2015, she received the Robert A. Kistner, DO Award and then in 2020, received the Dale Dodson, DO Award, the two highest honors bestowed by the American Association of Colleges of Osteopathic Medicine. She has received numerous other awards.

Dr. Nichols has served on the boards of the Kansas City University College of Osteopathic Medicine, Osteopathic International Alliance and the American Osteopathic Foundation. By invitation she frequently speaks nationally on leadership, end-of-life care and outreach issues for osteopathic medicine. She is also authoring a book on Leadership for Physicians.

In 2004 Dr. Nichols created the endowed Costin Institute for Osteopathic Medical Educators, sited at Midwestern University/Chicago College of Osteopathic Medicine, a one-year hybrid fellowship which has graduated over 300 medical educators. Dr. Nichols teaches nationally and internationally on the topics of end-of-life care, physician leadership, and women leaders in medicine.

Dr. Nichols has no disclosures